Summer Lovin’ In the past month; I have sung new songs, learnt new dances, engaged in (funny but slightly bizarre?) camp traditions, over-eaten extensively on carbs, engaged in various debates ranging from topics of world peace and our effects on the environment, to the best Disney film made and an ongoing question of is water wet? (no). But most importantly in walking into this magical Jewish summer camp, known as Camp JCA Shalom, I have met the most amazing people, looked after and have grown to love the most amazing kids, and made friends that I will have and cherish for a lifetime. 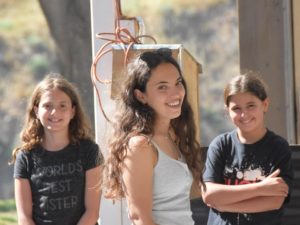 Camp JCA Shalom is an extremely special place for various reasons. Camp this year was set to be particularly challenging; given its difficult year following the destruction of its original campsite in Malibu, due to forest fires. Despite such a setback however, it seems to have made this camp an even more special place. What the staff tried to encourage, but what I noticed the children already believed the minute they arrived, was that camp is about the people, not the place. The community here is astonishing and I am in ongoing awe of how it creates an atmosphere which not only encourages individuality but cherishes each person for their differences and passions.

When I first arrived at camp, staff week appeared daunting, but by the third day, after a beach overnight in Malibu with the entire staff, it felt like the people whom I had just met, I had already known for years. When my first group of campers arrived, I found out that I would be looking after girls aged 10-11

and I was both extremely nervous and excited. Within days I fell in love with them, and I felt as if I had just become a mother, sister and best friend of 13 girls. I quickly learned that being a counsellor is one of the most rewarding things I have ever done. To bring happiness to the children you look after and to simply see them smile from something you have said or done truly has meant the world to me being here. It has also given me confidence in so many ways and to see my enthusiasm and positivity from my love of this job extend to my campers is so special.

I am excited for every day, every challenge and every year that I am able to come back to Camp JCA Shalom. #SummerLovinCamp