You are here:
LEV Conference

LEV, ‘Lift Every Voice’, is an annual Jewish summer camp conference where song-leaders going to Jewish camps are trained to go forward to their camps and communities and inspire through music. The environment that can be created through singing together is magical. Music is empowering, it enables people to liberate their emotions and feel comfortable around one another. As Plato once said, “Music is a moral law. It gives soul to the universe, wings to the mind, flight to the imagination, and charm and gaiety to life and to everything.”

I was honoured to be invited to this year’s conference in Tulsa, where we learned that the job of a song-leader is not to perform but to bring a room together through singing, and enable everyone to feel a part of the music. Additionally, I came to appreciate the powerful role music has in educating and impacting our community.

Reflecting on LEV I laughed realising that I naturally sing most of the songs in an American accent, as that’s how they were taught to me. But likewise, at the end of this summer my American campers might just be singing their camp songs in a British accent. Through this realisation I really came to appreciate what the camp directors tell us about how much they value us bringing our British culture to an American Jewish summer camp and sharing it with the camp community.

When I came to the realisation that I wanted to go back to camp this summer, I never thought I’d be attending the Cornerstone seminar. To tell you the truth, I didn’t even know what cornerstone was! But when camp asked me to go and represent the camp, as well as bringing back key skills that could be incorporated at camp, I agreed to go. Not knowing what to expect, I was amazed at what a fantastic experience it was. The Jewish geography alone and meeting new people through connections of my friends at home was amazing and the community formed within this brief 4 day seminar just showed me why the Jewish summer camp community is the best in the world and how much love everybody has for camp.

The conference was structured like camp, based at Capital Camps in Pennsylvania and consisted of sessions taught by fantastic Jewish educators and also time to get to know the Jewish Camps community within the US. You spend an allotted time everyday with your other camp mates to come up with a project to help better your camp this summer!

When I asked JCUSA if I should go, they told me it would be a great experience and that I should do it, and indeed they were right! I’d recommended anyone who’s camp attends the seminar to go if you can, as it also gives you a chance to be in the US for an extra few weeks before camp! The skills I learnt and project that my camp has undertaken for camp this year is exciting and Cornerstone helps gives the tools to carry this out. To see Jewish Camps all over America (and of which many affiliated with JCUSA) succeed and continue to grow was a great sight to see. Lastly, being a Cornerstone fellow is great, not only because you can put it on your CV as attending a leadership conference with the USA, but it helps develop you to be a better leader and increase your love for camp, of which is what camp is all about and what JCUSA helps gives hundreds of people every year. Hopefully more Brits will try and go next year… Bring on Summer 2019! 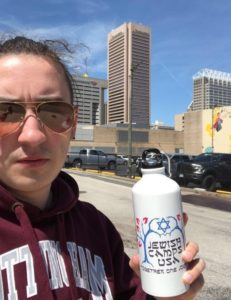 Hi, I’m Sara Cash, a third year University of Nottingham student and also the London and Nottingham Unit head. The last three years of my JCUSA journey are three I will never forget. Being the unit head in Nottingham for the last two years and the London one this year has been and honour and a privilege, working with such amazing ambassadors every day has been such a pleasure and I couldn’t thank them enough for everything they have done. We have really stepped up the game in Nottingham and London, bringing the best two units possible to camps all over the US and Canada. I am going to miss the Nottingham and London units so much but can’t wait to see them grow over in the future.

To all my ambassadors, thank you, and to those of you going to camp I wish you the best summer’s ever and I cant wait to hear all about it. I personally am really looking forward to spending my third summer at B’nai B’rith Camp Oregon this summer as the SIT coordinator. I couldn’t be more excited to continue my JCUSA journey of learning and growth and creating new friendships, and experiences and I cannot wait to see what this summer has to bring!

As I get ready to go to Camp Mountain Chai for my second summer after the most incredible year as Leeds Unit Head, I wanted to thank all our ambassadors for the help I’ve had from this year with interviews and at the amazing events we’ve been involved in. Including L’Chaim Leeds and Friday night dinners. I’ve loved every second of being unit head and looking forward to hearing the stories of those returning to Leeds in September as I start my second year as unit head. I hope you guys have a great summer and that JCUSA has the same impact on your life as it has on mine.

This year we held training on campuses in Birmingham, Nottingham and Leeds, Bristol and in London. A big thank you to all of our unit heads, ambassadors and alumni that helped to make this happen as it is always great to bring our units together. A big shout out to Amy Helfgott, who with the highest score from our campus training quiz on Kahoot, who went home with some fabulous JCUSA swag for the summer.

Continue to Page 2
Go to Top