An Israeli Perspective of Summer Camp 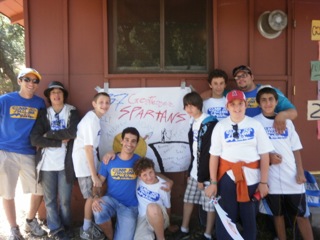 For me, that’s the best sentence that describes and defines my experience at camp.

Hello, my name is Noam Shinar, I am 27 years old and I’m from Israel. After high school, we get drafted into the army for three years.  Two months before that, I was hospitalized and I was found with a blood syndrome/disease which I have to take pills on a daily basis for and because of that the army couldn’t draft me.

I knew and felt that I have to do something in order to contribute, in my own way, to my country. I had decided to do National Service – which is basically the same as the Army, but only in different aspects (mine was education and guidance) for a year or two.

I volunteered as a counselor in a therapeutic boarding school in Jerusalem for kids aged 12-15. This was for kids who suffer from tough emotional problems and so the court decided to take them out of their homes.

This was without any doubt, the most important year of my life. I felt that I gave and contributed a lot, and also I got a lot in return. I learned a lot about myself and it was extremely challenging and fun.

This was the first time in my life that I filled a role of a counselor, and it was so special and fun. I never knew I would feel that good.  After my National Service I felt that I wanted to contribute more. After a bit of research I found out that there is an option for Israelis to go and fill a role as counselors in a Jewish summer camp in the United States .

Full Disclosure – we, as Israelis, don’t have a clue about what a Jewish summer camp in America is (beside the things we see on T.V.) spoiler alert – there are lots of similarities 🙂

I decided to do it. Through the Jewish Agency I went as a part of an expedition (MISHLACHAT) of 15 Israelis to California, to a Jewish summer camp called Camp JCA Shalom which is located up in the mountains near Malibu.

As a person who grew up in Israel, I didn’t know much about the Jewish people in the United States. I arrived 2 days before the beginning of staff week (which is a week of preparation for the counselors before the kids arrive) and people immediately loved me – because I’m an Israeli, because I’m Jewish and because I came to contribute.

It’s hard for me to describe to you how weird it was for an Israeli like myself.  We grow up thinking that most of the world doesn’t like us (throughout the years I’ve found out that it is not true) and all of a sudden, in the middle of the mountains in sunny California, people love me and my country?!  These are all people who grew up on the same values, customs and with the same history like me – despite the fact that they are not from Israel.

How come I had never heard about it before? It was so much fun, and a bit odd, to have a conversation with an American about Chanukah for example and what it means and its values.  After staff week, something had changed in me forever.

I realized that the people at camp are like me. For me – if they are like me then they are my family.  For an Israeli like me, to feel that love and to feel part of a family on the other side of the world is something huge!  Regarding the four English counselors who worked alongside with me – I always felt that they felt exactly the same way as me.

I am secular, and I always took my Judaism for granted, I guess because I live in a Jewish country. But for the first time in my life I felt proud to be Jewish and ever since camp that pride has remained 🙂

I felt proud to be a part of the Jewish community at camp, to bring Israel to the campers (kids) and to the co-workers (counselors and staff) to answer every question and to participate in discussions about Judaism and Israel.

I filled two roles at camp: Basketball Specialist (5 hours a day) and a Counselor (19 hours a day). It was a lot of fun to combine Jewish and Israeli games within the activities, especially when the kids were having so much fun with it.

My two favorites activities at camp were Song Session and Israeli Dance (brutal truth – I had never sang or danced before) but for me those were the best times with the most happiness, fun and job at camp.  Of course, my kids at camp sensed that and these were their favourite activities too.

There is a very fun border line with the kids at camp and once you get it, then the magic really starts. On one hand, you can have as much fun as you want with the kids and go wild with them, along with connecting with your inner child.  On the other hand, your kids will respect you, really listen to what you have to say, come to you for guidance on their tough times and look at you as their role model. For me this was one of the greatest feeling ever.

If we go back to that sentence at the beginning, I almost didn’t sleep during camp because I wanted to absorb every second and every minute I had there. I wanted to experience it as best as I could, and mostly I wanted to continue this reality, because it was so much more fun and special than the fantasy.